Nostalgia is a strange idea, a rose-tinted longing for the past. Nostalgia gets even weirder when it’s about the recent past. Computers are young and the web is younger still but already we’re feeling nostalgia for past aesthetics. Retina-searing colour schemes, monospace, and flashing Geocities GIFs. Relics from our past. 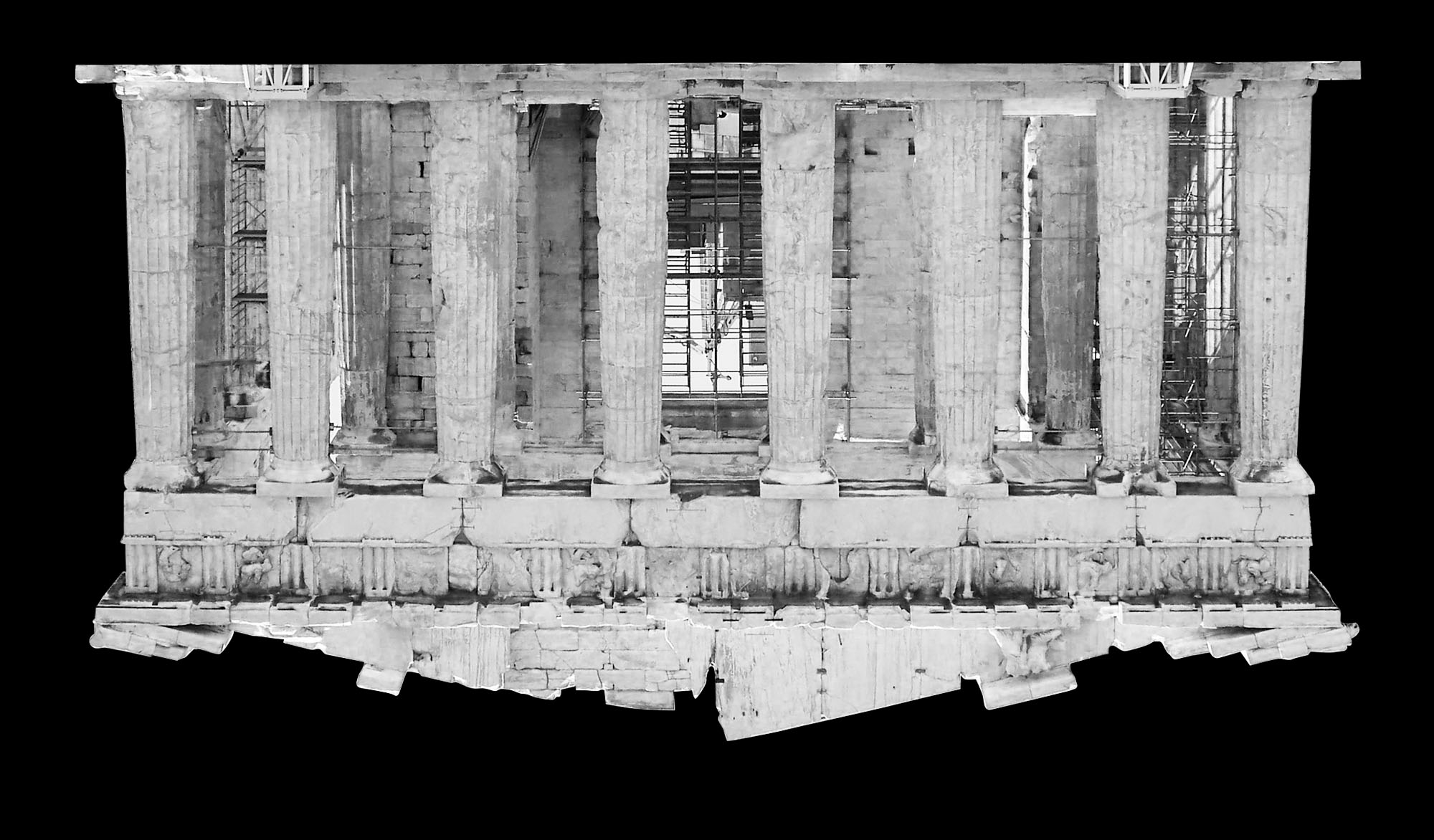 Greek/Roman architecture surrounds us—the Greek Parthenon, the Roman Pantheon and all of their imitators like Napoleons’ La Madeleine. In fact, in the US most government buildings are based on the Romans from Capitol Hill to local libraries and universities. All of them are inaccurate—imperfect copies.

The Parthenon would have originally been incredibly colourful. It would have been adorned in reds, blues and golds. The white Elgin Marbles would have been painted to match skin tone. We have this idea of bare, white marble buildings and statues being beautiful because to us history has made it beautiful. Here’s the British Museum briefly explaining why.

This collective memory loss is true of our buildings and our sculpture. How often have you seen great men of the past depicted as heads in white marble staring out glassily through empty eyes filled with knowledge? Caesar, Darwin, Beethoven, all white marbles with empty, omniscient eyes staring back. 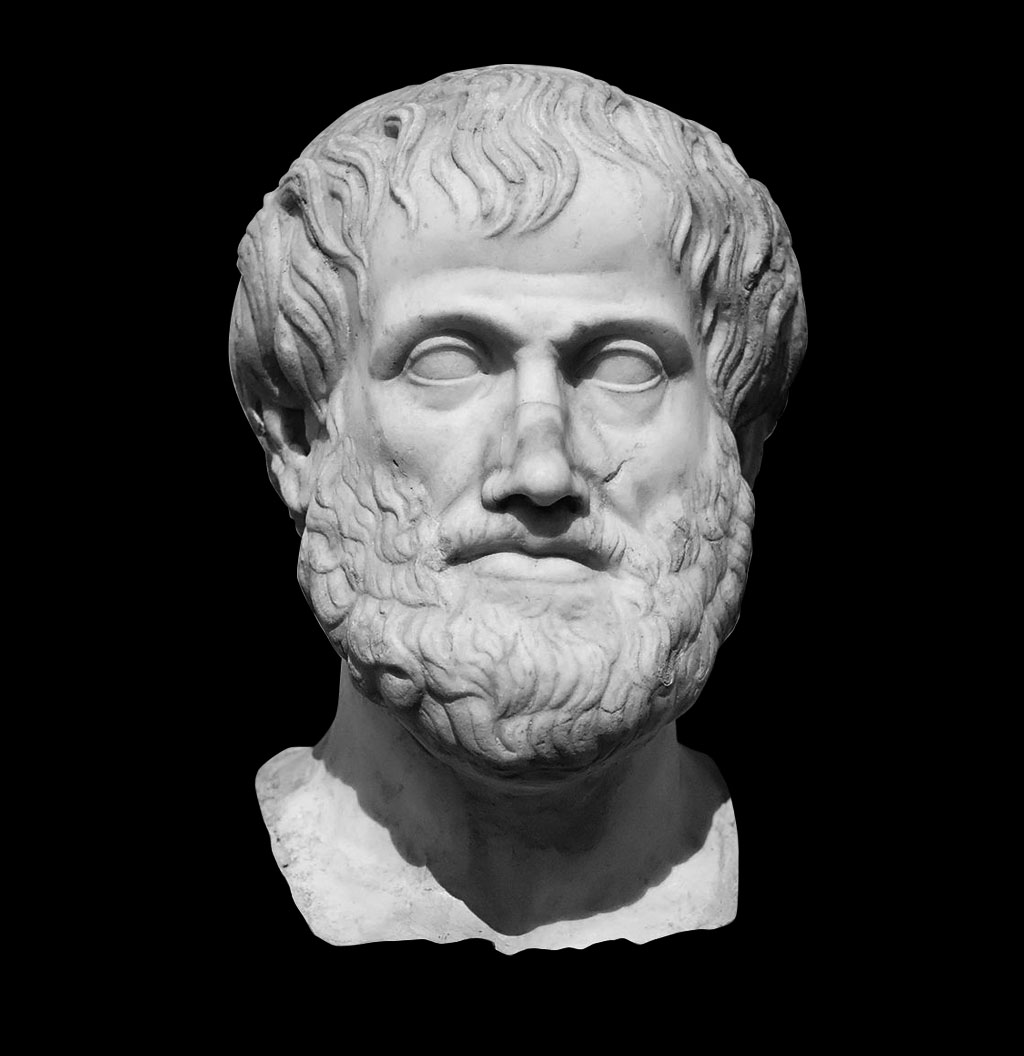 You won’t be surprised to learn this too is an imperfect copy. The Greek and Roman statues we imitated weren’t busts but often pieces from full-body statues, either broken or waiting to be inserted into an existing body. They were later discovered as fragments and mounted on plinths. We inadvertently created a new class of sculpture. 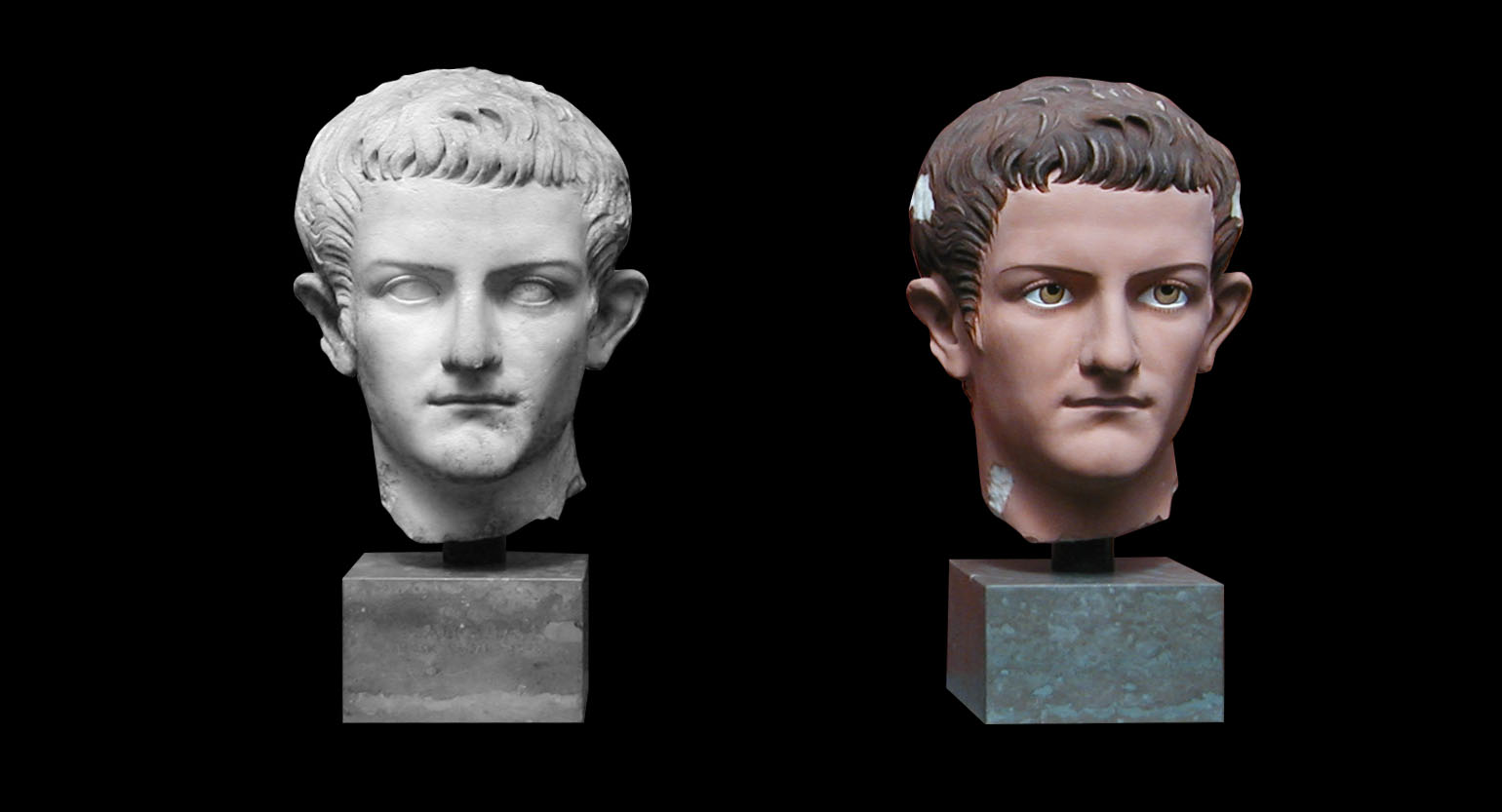 These are two busts of the Emperor Caligula. One as we would expect it in white marble and the second as how the ancients would have decorated it. The addition of paint pushes the statue towards uncanny valley. This colour scheme isn't even the gaudiest example. The statue’s eerie, all-knowing eyes suddenly look cheap and fake once painted.

We shouldn’t lament these copies for not being exact. This is instead a lesson in history. No matter how hard we try to recreate an aesthetic we inadvertently create something new—a new art movement, a new sculpture, even a new kind of website. 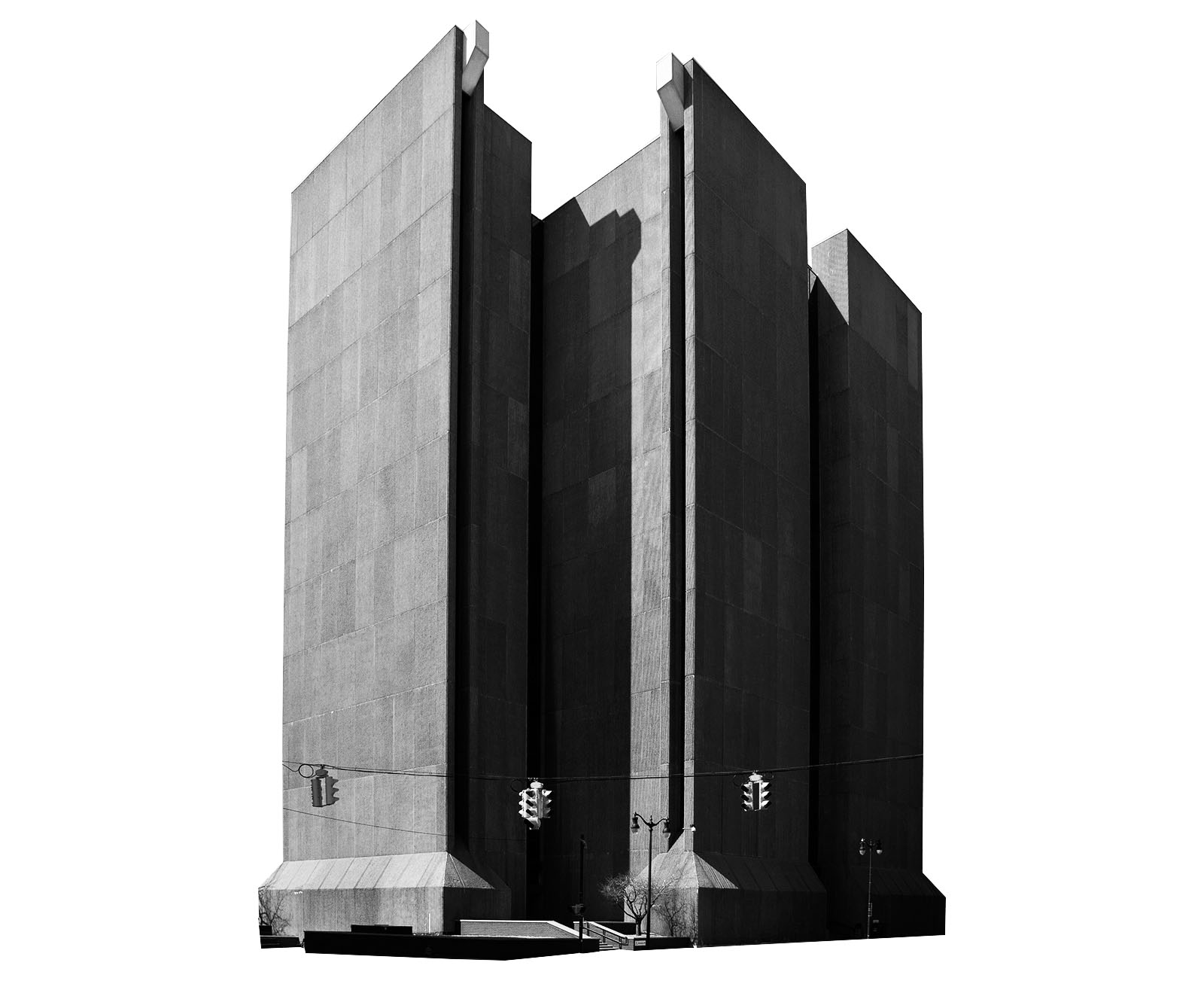 We’re still doing this magic trick. We imitate and yet create something new, it propels culture forward and this applies to the web too. Camerons­World.net creator Cameron Askin has crafted a sort of homage to Geocities (a 90s proto-social network where anyone could make their own website) composed of hundreds of GIFs pulled from its archives. Even this love-letter to web 1.0 cannot avoid the fingerprints of its time. It’s built using node.js, SASS and it’s responsive but it’s still emotive of the internet’s collective past.

There’s not a whole lot of ‘nice,’ or user-friendly, web design in there but the archives are exploding with creativity.

Askin’s sentiment is echoed by his peers. Many web designers are deliberately dropping the mantles of usability and legibility in favour of creativity. This new movement in web design has fittingly adopted the name of a term from architecture—Brutalism. 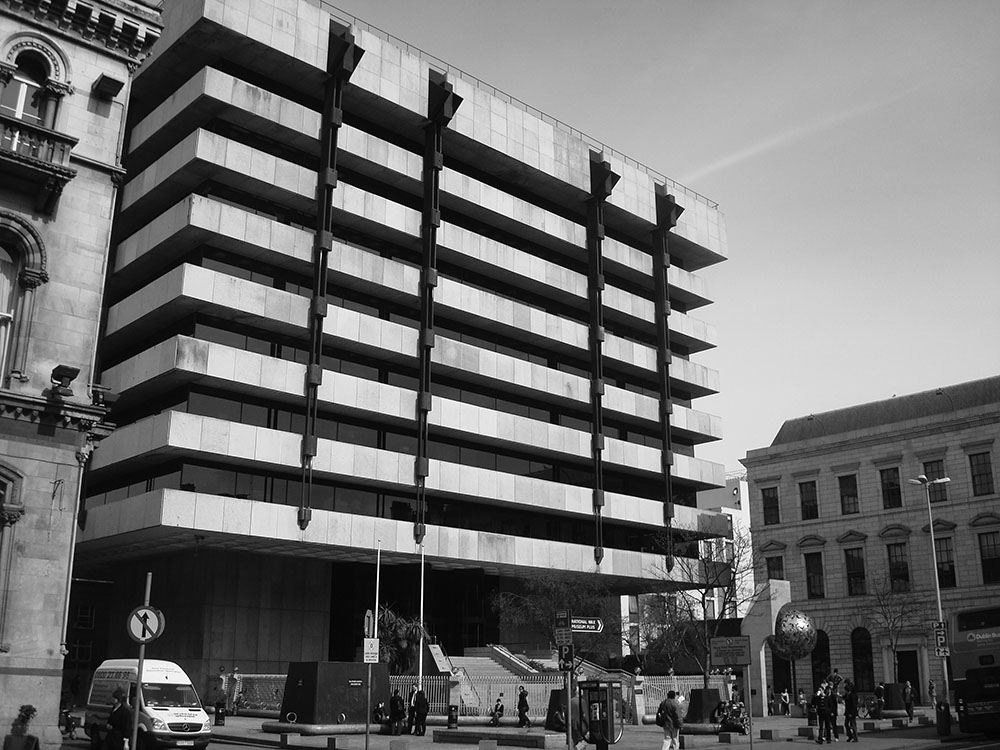 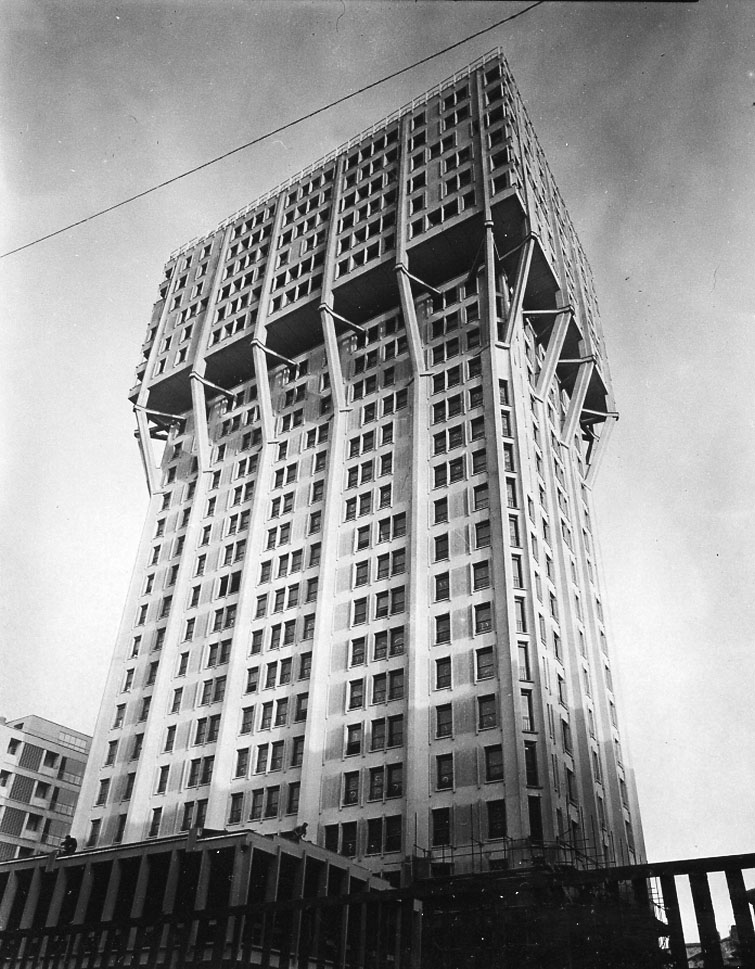 The architectural and digital movements, though decades apart, share a common goal in separate mediums. Brutalist architecture was a branch of Modernism that rejected the sleek, rectilinear whiteness of 1920s Modernism. Brutalism was concrete, unapologetic, angular. Its detractors branded it ugly. We don’t expect paintings or films to be soothing or unchallenging so why should buildings be palliative?

In its ruggedness and lack of concern to look comfortable or easy, Brutalism can be seen as a reaction by a younger generation to the lightness, optimism, and frivolity of today's webdesign. 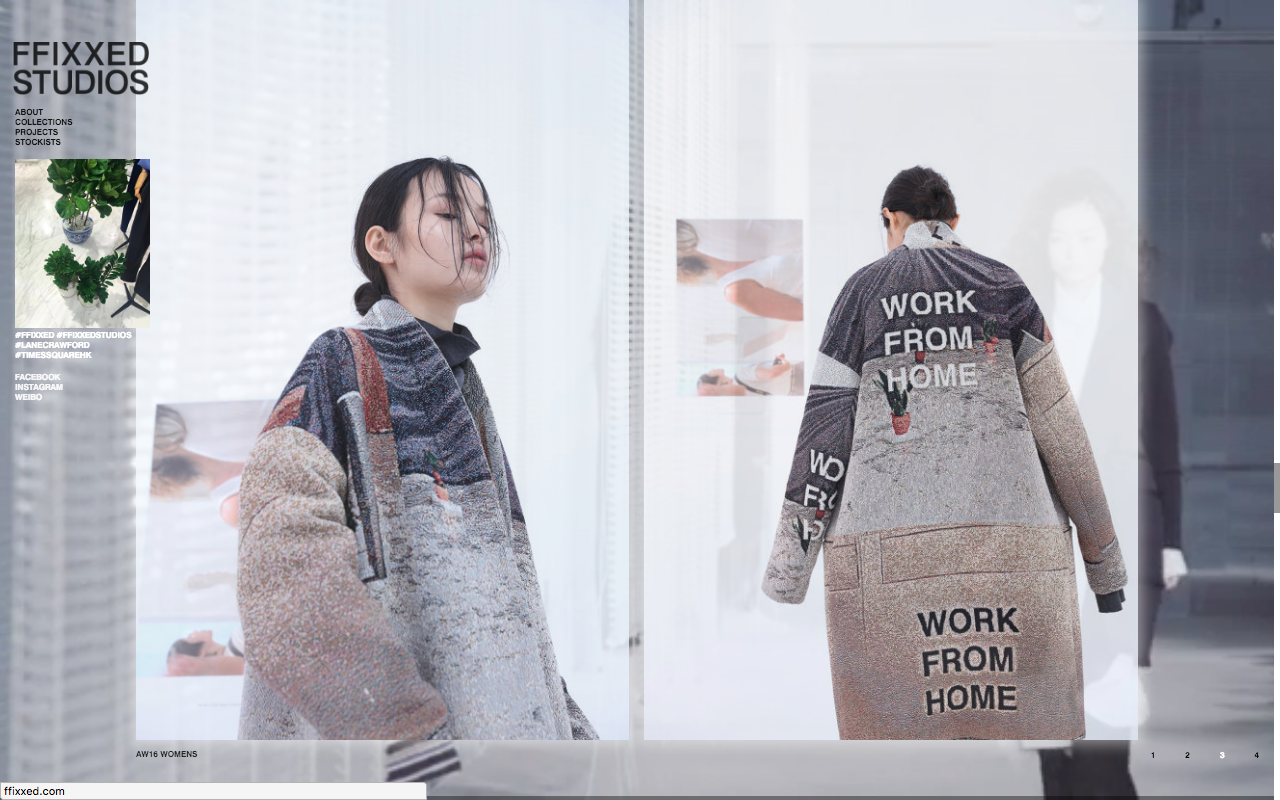 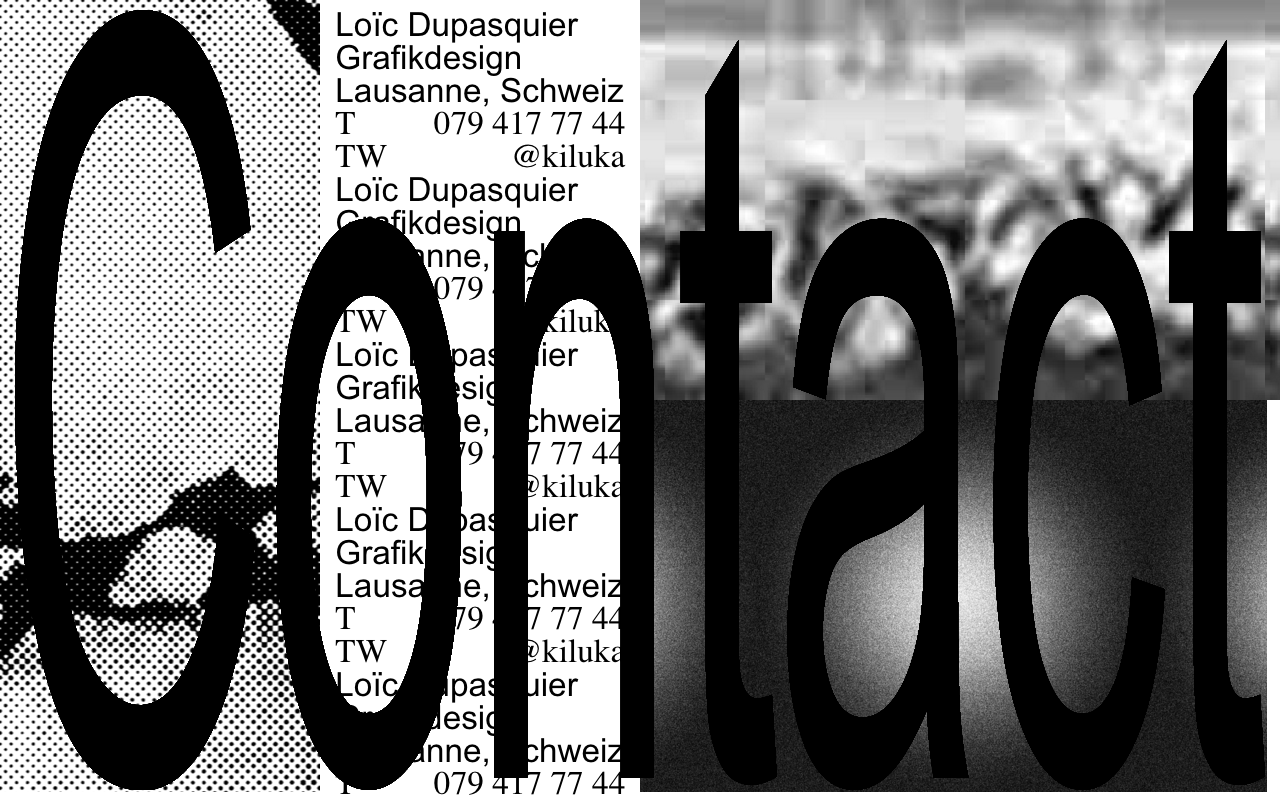 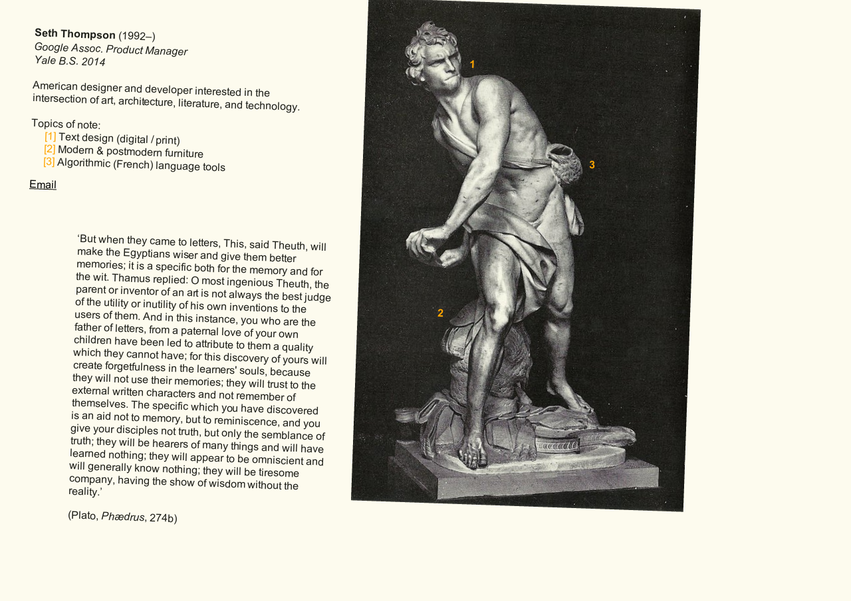 History is full of reactionary movements. Hippies were a reaction to the previous generation of salarymen in identical grey-flannel suits, Post-Modernism was an expressive reaction to the stringent rules and uniformity of Modernism. Brutalist websites are a response to a decade of user-centered design. A reaction to perfectly polished, pushable, easy-to-navigate websites. 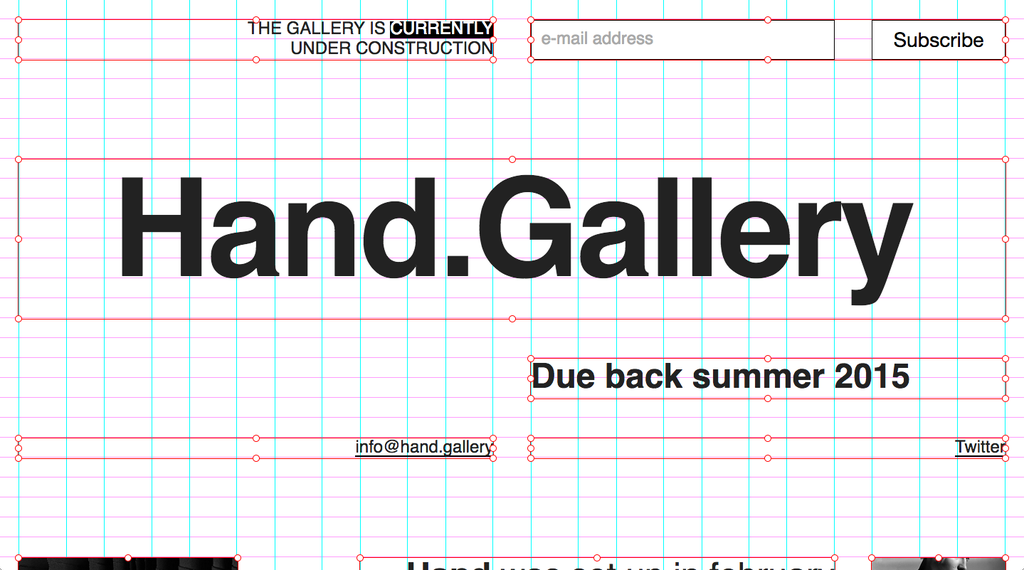 The prevailing attitude in web design is artificially friendly, data-driven design, best UX practices, research, testing, research, testing. People are bored. People are bored of knowing instinctually how to use a website. Brutalist sites act as a salve to this boredom. A site where function, rationality and usability take a backseat. The navigation, the articles, whatever are deliberately obfuscated. A Brutalist website is HARD to use and that difficulty is refreshing to a generation that has grown up with perfectly groomed apps from cutesy Silicon Valley startups.

Click something. See what happens. Be surprised. Be delighted. Be nostalgic.

If you’re into comics you may have heard of Alan Moore, and if not you’ve at least seen the Guy Fawkes mask he popularised. One of his most famous comics “Watchmen” is interspersed with fake notes typed by his future dystopian villain (slight spoilers). This antagonist runs a huge corporation that—among other things—sells perfume.

In an era of stress and anxiety, when the present seems unstable and the future unlikely, the natural response is to retreat and withdraw from reality, taking recourse either in the fantasies of the future or in the modified visions of a half-imagined past.

This is taken from one of those notes by the villain. It’s a comment on the recent ad for their perfume “Nostalgia”. It alludes to Moore’s belief in nostalgia as a tool. It can be used to draw inspiration from the past, to calm the masses, to sell.

What once were technological restrictions became tools of nostalgia. The early web was restricted in size, in fonts, in colours, in layouts, but once a restriction is lifted it becomes a choice. GIFs were an early web animation method with many shortcomings—a limited colour palette, large file sizes and pixellation. Now a GIF is a deliberate stylistic decision—a tool of nostalgia. Now we pixelate images, videos and games not because of hardware or bandwidth but to be emotive of the past.

Bloomberg uses the tool of nostalgia well. Their site-wide redesign as well as their many special features delicately balance ‘90s computing reminiscences with usability. To an otherwise modern site they’ve added subtle references to the early web. They use deliberately primitive GIFs showing a ‘90s era desktop on the 404 page; text is cropped uncomfortably tight on headlines, harking back to the poor typesetting of early sites; and their signature blue is nearly rgb(0,0,255) or the default blue of the early web (and the blue used in this article). Their readers remember dial-up, they remember Netscape, they remember Windows 95. Small , stylistic decisions mount to form a connection with their readers.

More recently, The Outline has launched with a design full of references to the past. This is a trend-heavy approach that may date faster but it’s visually striking and emotive. Interestingly, The Outline rather than referencing ‘90s computing has opted to reminiscence about other elements of the era. The homepage background conjures images of tie-dye, they use the decade’s omnipresent wavy-line pattern; and their Killer Acid illustrations would look right at home in a ‘90s skate shop. Our nostalgia, our inspiration, our references should not just be restricted to the web but also to culture as a whole—music, art, film, fashion. The deeper and wider our sources of inspiration the more coherent a whole we can create.

Web design is in it’s infancy but we already have a collective past. It’s crude, it’s limited by the technology of it’s time but to those who grew up with it it has meaning. Some companies are already referencing it beautifully—Bloomberg, Acronym, The Intercept. I’m not arguing for us to dump all javascript libraries and build Brutalist sites entirely from HTML but we can do better. Ignore sample groups, ignore market research, take a risk, make something you’re passionate about with the tools you have. Inspire the next generation’s nostalgia.

This article was written for Mariko Kosaka’s Web Advent Calendar. 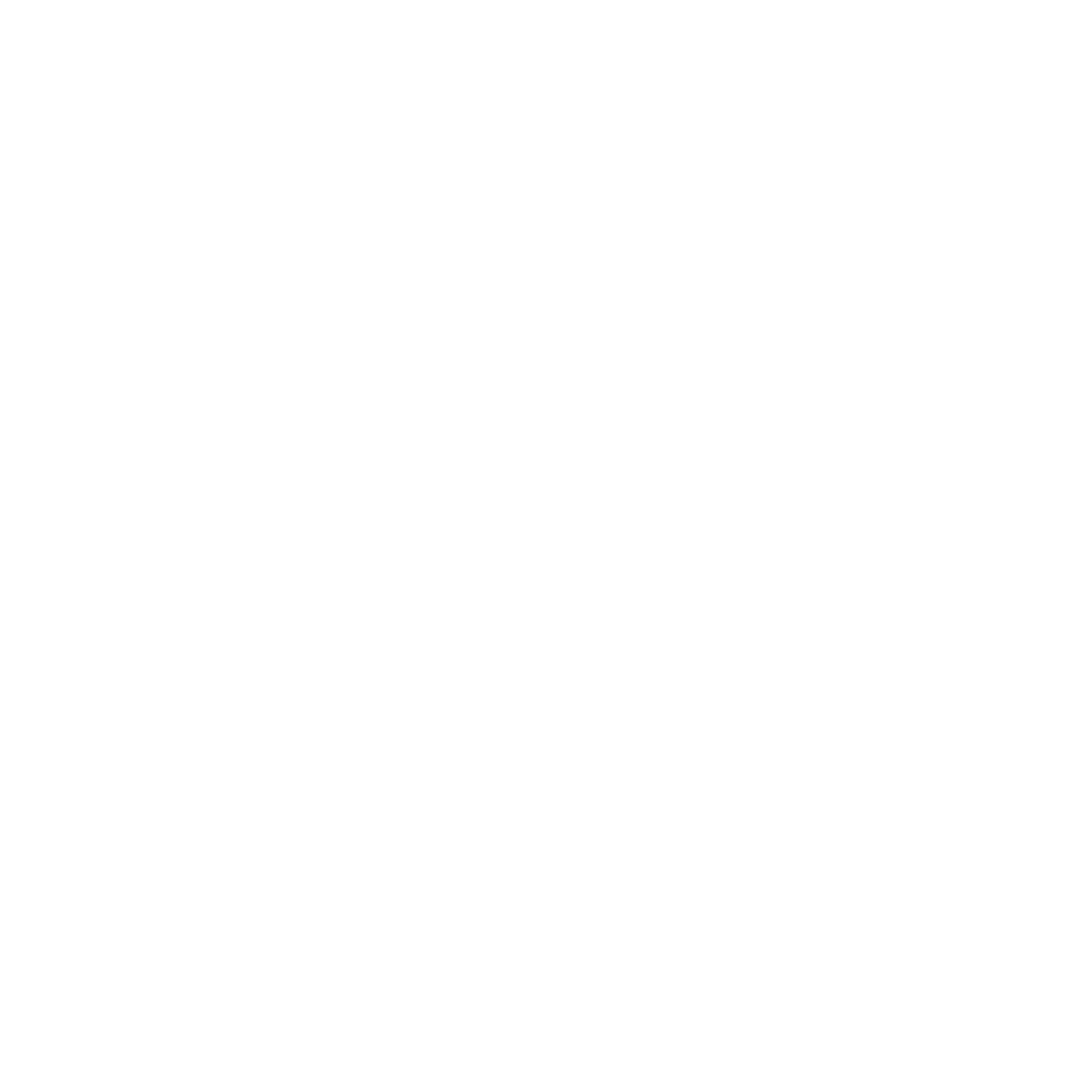